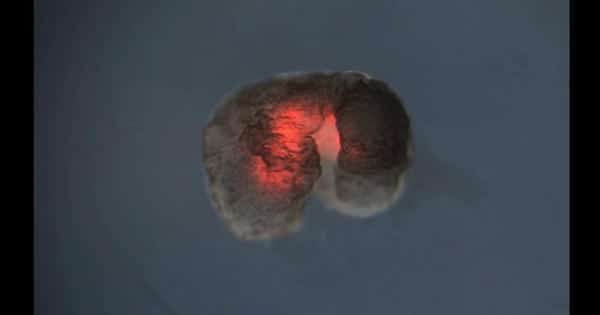 In 2020, a team of biologists and computer scientists from Tufts University and the University of Vermont (UVM) developed a novel, tiny self-healing biological machines called “Xenobots” from frog cells that could move around, push a payload, and even exhibit collective behavior in the presence of a swarm of other Xenobots.

The same team has now created life forms that can self-assemble a body from single cells, move without the use of muscle cells, and even have recordable memory. The new generation Xenobots can also move faster, navigate different environments, and live longer than the first edition, and they can still work in groups and heal themselves if they are damaged. The findings of the new study were published today in the journal Science Robotics.

Scientists up to create the next version of Xenobots – tiny biological robots that self-assemble, carry out tasks, and can repair themselves. Now they can move faster, and record information.

In contrast to Xenobots 1.0, which was built from the top down by manually placing tissue and surgically shaping frog skin and cardiac cells to produce motion, the next version of Xenobots is built from the bottom up. Tufts biologists took stem cells from the African frog Xenopus laevis embryos (hence the name “Xenobots”) and allowed them to self-assemble and grow into spheroids, where some of the cells differentiated to produce cilia — tiny hair-like projections that move back and forth or rotate in a specific way. Instead of using manually sculpted cardiac cells, which allowed the original Xenobots to scurry around, cilia provide the new spheroidal bots with “legs” to move them quickly across a surface. Cilia are normally found on mucous surfaces in frogs and humans, such as the lungs, to help push out pathogens and other foreign material. They have been repurposed on the Xenobots to provide rapid locomotion.

“We are witnessing the remarkable plasticity of cellular collectives, which build a rudimentary new ‘body’ that is quite distinct from their default — in this case, a frog — despite having a completely normal genome,” said Michael Levin, Tufts University’s Distinguished Professor of Biology and director of the Allen Discovery Center, and the study’s corresponding author.

“Cells in a frog embryo work together to form a tadpole. In this context, we can see how cells can repurpose their genetically encoded hardware, such as cilia, for new functions such as locomotion. It’s incredible how cells can spontaneously take on new roles and develop new body plans and behaviors without long periods of evolutionary selection for those characteristics.”

“In some ways, the Xenobots are built similarly to traditional robots. Only cells and tissues, not artificial components, are used to build the shape and create predictable behavior “said senior scientist Doug Blackiston, who co-wrote the study’s first draft with research technician Emma Lederer. “From a biological standpoint, this approach is assisting us in understanding how cells communicate as they interact with one another during development, and how we might better control those interactions.”

While Tufts scientists worked on the physical organisms, UVM scientists were busy running computer simulations that modeled different Xenobot shapes to see if they might exhibit different behaviors, both individually and in groups. The team, led by computer scientists and robotics experts Josh Bongard, used an evolutionary algorithm to test hundreds of thousands of random environmental conditions on the Deep Green supercomputer cluster at UVM’s Vermont Advanced Computing Core. These simulations were used to identify Xenobots that could work together in swarms to collect large piles of debris in a particle field.

“We understand the task, but it is not obvious to most people what a successful design should look like. That’s where the supercomputer comes in, searching the space of all possible Xenobot swarms for the swarm that does the job the best “Bongard explains. “We want the Xenobots to be useful. We’re starting with simple tasks, but our ultimate goal is to create a new type of living tool that can, for example, clean up microplastics in the ocean or contaminants in soil.”

The new Xenobots, it turns out, are much faster and better at tasks like garbage collection than last year’s model, working in a swarm to sweep through a petri dish and collect larger piles of iron oxide particles. They can also traverse large flat surfaces and narrow capillaries. These findings also imply that in silico simulations could be used to optimize additional features of biological bots for more complex behaviors in the future. The ability to record information is an important feature added in the Xenobot upgrade.

The ability to record memory and use that information to modify the robot’s actions and behavior is a key feature of robotics. Tufts scientists designed the Xenobots with a read/write capability to record one bit of information, using a fluorescent reporter protein called EosFP, which normally glows green. When exposed to light with a wavelength of 390nm, the protein emits red light instead.

Before excising stem cells to create the Xenobots, the cells of the frog embryos were injected with messenger RNA coding for the EosFP protein. The mature Xenobots now have a fluorescent switch built in that can record exposure to blue light at 390nm.

The memory function was tested by allowing 10 Xenobots to swim around a surface with one spot illuminated with a 390nm light beam. After two hours, they discovered three bots emitting red light. The rest retained their original green color, effectively recording the bots’ “travel experience.”

In the future, this proof of principle of molecular memory could be extended to detect and record not only light but also radioactive contamination, chemical pollutants, drugs, or disease conditions. Further development of the memory function could allow the bots to record multiple stimuli (more bits of information) or allow them to release compounds or change behavior in response to stimuli.

“When we add more capabilities to the bots, we can use computer simulations to design them with more complex behaviors and the ability to perform more elaborate tasks,” Bongard explained. “We could potentially design them not only to report environmental conditions, but also to modify and repair those conditions.”

“The biological materials we’re using have many features that we’d like to someday incorporate into the bots – cells can act as sensors, motors for movement, communication, and computation networks, and recording devices to store information,” Levin explained. “Xenobots and future versions of biological bots can construct their own body plan as the cells grow and mature, and then repair and restore themselves if they become damaged, which metal and plastic counterparts cannot. Healing is a natural characteristic of living organisms that have been preserved in Xenobot biology.”

Within 5 minutes of being injured, the new Xenobots could close the majority of a severe full-length laceration half their thickness. All injured bots were eventually able to heal their wounds, regain their shape, and resume their work as before.

Levin adds that metabolism is another advantage of a biological robot. Unlike metal and plastic robots, the cells in a biological robot can absorb and degrade chemicals and function as tiny factories synthesizing and excreting chemicals and proteins. The entire field of synthetic biology, which has previously been focused on reprogramming single-celled organisms to produce useful molecules, can now be applied to these multicellular creatures.

The upgraded bots, like the original Xenobots, can survive for up to ten days on their embryonic energy stores and carry out their tasks without the need for additional energy sources, but they can also operate at full speed for many months if kept in a “soup” of nutrients.

What the scientists are really after

An engaging description of the biological bots and what we can learn from them is presented in a TED talk by Michael Levin.

In his TED Talk, professor Levin describes not only the remarkable potential for tiny biological robots to carry out useful tasks in the environment or potentially in therapeutic applications, but he also points out what may be the most valuable benefit of this research — using the bots to understand how individual cells come together, communicate, and specialize to create a larger organism, as they do in nature to create a frog or human. It’s a new model system that can provide a foundation for regenerative medicine.

Xenobots and their descendants may also shed light on how multicellular organisms evolved from ancient single celled organisms, as well as the origins of information processing, decision making, and cognition in biological organisms.

Recognizing the tremendous potential of this technology, Tufts University and the University of Vermont have formed the Institute for Computer Designed Organisms (ICDO), which will be formally launched in the coming months and will pool resources from both universities and outside sources to create living robots with increasingly sophisticated capabilities.