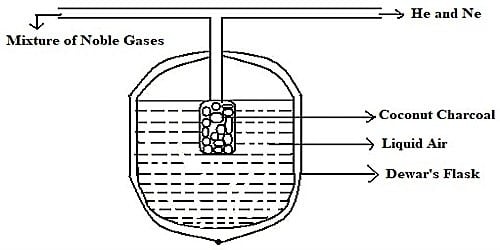 The individual noble gases can be separated by Dewar Charcoal adsorption method.

The principle involved in Dewar’s method:

The mixture of noble gases obtained by the above method is separated into individual constituents by the use of coconut charcoal which adsorbs different gases at different temperatures.

The mixture of noble gases is passed into a double-walled bulb containing coconut charcoal and placed in a low-temperature bath at 173K. It is allowed to remain in contact with the charcoal for about half an hour. At 173K, only argon, krypton, and xenon are adsorbed by the charcoal while helium and neon remain unadsorbed. These are pumped out and collected.

The mixture of helium and neon is kept in contact with coconut charcoal at 93K which completely adsorbs neon leaving free helium.

The charcoal at 173K containing argon, krypton, and xenon is placed in contact with another charcoal at the temperature of the liquid air when argon diffuses into the other charcoal. Here noble gases are separated by fractional distillation of liquid air using the difference in the boiling points of these using Claude’s apparatus.

The temperature of the first charcoal (temp.173K) still containing krypton and xenon is raised to 183K when Krypton is set free while xenon remains adsorbed in the charcoal. When it is heated, xenon is recovered.

Procedure: Separation of noble gases is carried out in a flask designed by Dewar called Dewar’s flask. It is a double walled flask containing activated coconut charcoal in the central point. A tube is arranged above the flask, to introduce the gaseous assortment and to remove the unadsorbed gases. The procedure involves the following steps.