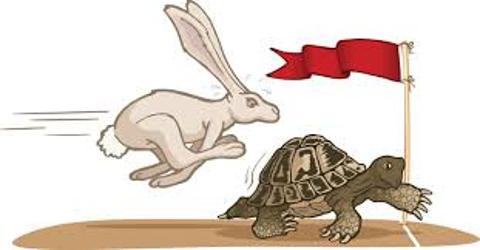 Slow and steady wins the race

Long ago there lived a hare in a forest. He was always proud of his speed. A tortoise also lived nearby. The hare always teased the tortoise for his slow speed. The hare said, “You have as many legs as I have. But I am sure you can’t run as fast as I can.

The tortoise, however, challenged the hare and proposed to run a race. At this the hare was much amused. So he said. “Good, let’s fix a date for the race.” They fixed a date. A fox came to see the race. The tortoise and the hare came to the starting point. The race began. The hare began to run Very fast. He jumped and jumped. He ran a kilometer in a few minutes. Soon he found the tortoise far behind him. Ile became sure of success. Then he stopped. He said to himself, “What is the use of going so fast? Perhaps, the tortoise has covered only a few yards by this time. So, I ran very well have a good sleep before he comes up. So saying, the hare slept on the way. In the meantime, the tortoise moved on and on. He did not stop anywhere. When he came near the hare he saw the hare lying fast asleep. He smiled and quietly passed by him.

Its meaning: It means that “even a person with average talent can achieve success through persistent efforts.”