Ethanoic acid (acetic add) is a weak acid which dissociates in water. 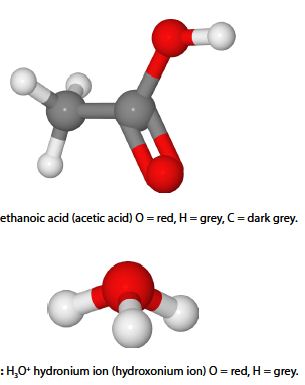 Where each of the terms in square brackets have been divided by the standard concentration c° = 1 mol L-1 and so the units cancel out to give the pure number, dimensionless “concentrations”. The concentration of the solvent, water, [H2 0] is approximately constant and is incorporated into the acidity constant Ka to give

Acetic add has an acidity constant Ka = 1.8×10-5. Calculate the hydronium ion concentration [H3O+] for a 0.15 mol L-1 solution of acetic add? We can tackle this chemical problem by saying the fraction of acid dissociated at equilibrium is x. For each molecule of acid that dissociates it gives an equal number of acetate anions and hydronium cations. So at equilibrium the tricky chemical problem has been reduced to solving the quadratic equation using the quadratic formula.

The fraction of acid lost in going to the equilibrium, x, is found by solving the quadratic equation by: (1) multiplying both sides of the equation by the right hand denominator and cancelling out in any single term; (2) multiplying out the bracket;

Once we have taken the square root of the second term in the numerator then we only need to retain a sensible number of 4 or 5 significant figures. So which value of x applies in this question? Remember that x is the fraction of acetic acid that has dissociated. A fraction is a positive number of less than one. Another way of looking at this is that you cannot have a negative concentration, thus the chemically correct result is

Although not part of the question, for the 0.15 mol L-1 acetic acid solution, this concentration of H3 O+ corresponds to a pH = 2.8.

Verification of the Particle Character of Electron