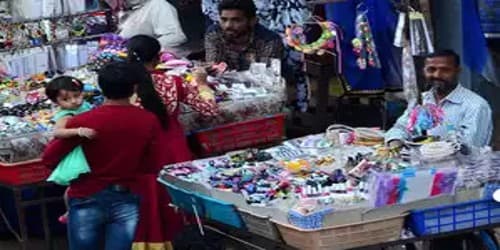 A street hawker deals in various things by hawking from street to street. He is a self-employed person. He is a familiar figure in the cities and towns. He is seen particularly near schools, at fairs, corners of roads or railway stations. He raises a strange outcry to draw the attention of his customers. They ply their wares from street to street and colony to colony. The street hawker’s dress is shabby. He wears a peculiar dress in different colors. Children are fond of him because sometimes he wears a strange dress, sings songs or plays on a flute. He tries to attract the attention of the customers by using different tricks. He carries his goods either in bundles or in a basket. These consist of vegetables, fruit, cloth, utensil, sweets, ice-cream, parched grams, soap, and toys. Sometimes he walks about with his goods on a wheeled platform. He carries his materials on the head and sometimes in hand and sometimes in a small handcart.

He generally buys his goods at a cheaper rate and sells them at a good profit. His customers are usually children and women. He knows his business very well. As the credulous, they agree to pay whatever price he demands. He knows well how to attract a schoolboy, or a villager or a passer-by. So He does not like elderly men. He usually sells toys. Cosmetics, ready-made garments, daily necessaries, utensils and balloons of various colors and shapes. Their goods are cheaper than those sold in the market. Children gather around him and women hail him. He is a clever man. But sometimes they supply spurious and sub-standard things. He goes out of his moving shop when the elderly people are out on duty or business. He walks along roads and streets from dawn to dusk. He demands a higher price for his things but he sells his things at a cheaper rate. But sometimes he cheats simple customers. So we should be careful of the street hawkers who are cheats.

Hawker is an important member of society. They make life and buying convenient. Through them, the market comes to our door-step. However, he is an expected person for some people. He serves us in many ways. Although he works hard, his life is miserable. He comes to our street in the burning sun and in the severe cold weather. All most all the time he leads a subhuman life. He saves our time and also inconvenience. We should be sensitive and sympathetic towards him. The service that a street hawker does to our society is simply great. His dignity of labor commands our respect. We should respect his hard labor and never look down upon him.