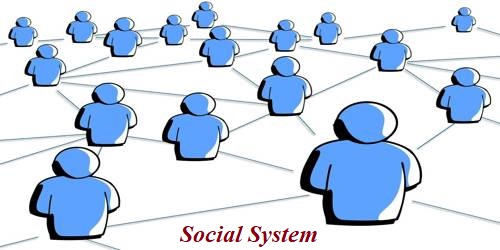 A social system is a system is a combination of interrelated parts operating as a whole. The basic operation of a system is that it receives inputs from its environment, processes these in some way, and then releases outputs to the environment.

In sociology, the groups and institutions that work together to make a complete whole are known as social systems. The concept of a social system embodies one of the most important sociological principles: that the whole is more than the sum of its parts.

There are some characteristic of the social system that is given below:-

(a) Subsystem: The subsystem is in retreat with the whole system of social concerned.

(e) Norms. Without norms, no role can be performed. In a system, the members play their roles according to the norms given to them. The players of cricket match have the norms of fair and foul and victory and defeat. Similarly, all social systems operate in presence of their respective social norms.