1) Simple periscope: Periscope is used to see a distant object directly if there is an obstacle. A simple periscope is constructed using two plane mirrors. This instrument is formed utilizing successive reflection of light. In below figure a simple periscope is shown. Here, two plane mirrors are placed parallel to each other at an angle of 45° with the axis of a long rectangular wood or metal tube. At first parallel light rays from the distant object incident on the mirror M1 at angle of 45° with the normal to the mirror. The incident ray is reflected by the mirror M1 at an angle 45° and incident on the mirror M2 travelling along the axis. The light ray is again reflected by the mirror M2 and enters the eyes horizontally. So, the object can be seen. 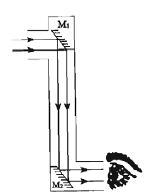 Thus by changing the direction of light we can see objects which cannot be seen directly using plane mirrors.

Periscope is used to watch games in a crowd, to see something behind a wall, to observe the movement of the enemy soldiers etc. More developed types of periscope are used using prism in a submarine.

3) Plane mirrors in medical field: The dentists use concave minors to examine the teeth. The minor is placed very close to the teeth. As a result, a virtual and magnified image is formed in the mirror. Besides, the ENT doctors use concave mirrors for different purposes.