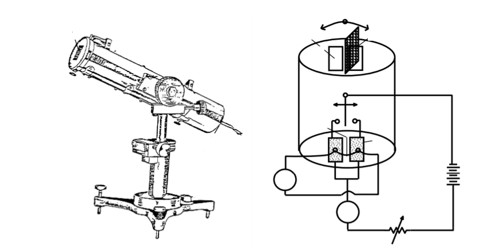 Pyrheliometer is an instrument used to measure the quantity of heat radiation and solar constant. It is a type of actinometer that can measure solar irradiance in the desired location and solar radiation flux density.

Pyrheliometer designed by Angstrom is the simplest and most accurate. This is a dependable instrument used to monitor direct solar radiation and has long been accepted as a working standard. The solar radiation spectrum extends approximately between 300 and 2800 nm.

A pyranometer is operated based on the measurement of the temperature difference between a clear surface and a dark surface. The black coating on the thermopile sensor absorbs the solar radiation, while the clear surface reflects it, and hence less heat is absorbed. A pyrheliometer is used to measure direct solar radiation from the sun and its marginal periphery.

Strip S2 is connected to an external electrical circuit as shown in Figure. Also, the heat produced in unit time in the strip; is given by VI, where V is the potential difference and I is the current flowing through it.

Knowing the value of V, I, A and a, Q can be calculated.