Home Physics Define Torque and Moment of the Torque or Couple

There are many examples in practice where two forces, acting together, exert a moment. or turning effect on some object. As a very simple case, suppose two strings are tied to a wheel at the points X and Y, and two equal and opposite forces, F, are exerted tangentially to the wheels (Figure). If the wheel is pivoted at its centre 0 it begins to rotate about 0 in an anticlockwise direction. 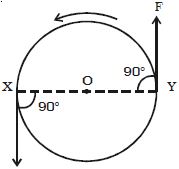 Torque = one of the forces x perpendicular distance between the forces

What is Reflection of Sound?