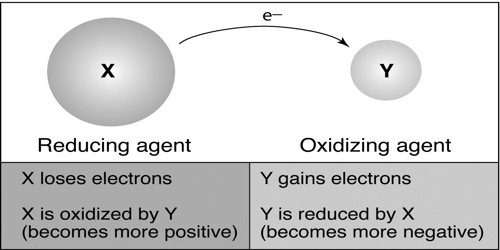 Based on the Classical concept:

We know that when an oxidizing substance oxidizes another substance than that oxidizing substance donates electro-negative atom or radical to the other substances or accepts electro-positive atom or radical. As a result electro-negative part of that substance increases. On the other hand, as the oxidizing substances release electro­negative part or accept the positive part, it is reduced. Both these changes happen in the same reaction. Oxidation and reduction constantly must happen at a similar time. You cannot oxidize something without reducing whatever is doing the oxidizing. The cause for this is based on how oxidation-reduction (redox) reactions work.

It can be explained by the following reaction:

Based on the electronic concept:

According to the electronic concept of oxidation-reduction, oxidation is such a chemical process in which an atom or ion releases one or more electrons. Oxidation and reduction are just ways to describe electron movement. On the other hand, the reduction is such a process where an atom or ion accepts electrons. Again the substance which releases electron is known as reducing agents. And the substance which accepts electron is known as the oxidizing agent. Therefore, when reducing agent releases electrons oxidizing agent accepts it. As the process of releasing electrons is oxidation and the process of accepting electron is reduction; then oxidation-reduction occurs together.

Oxidation and reduction are two parts of any reaction which performs gaining and releasing of an electron. For e.g. by the oxidation-reduction process between a sodium atom and a chlorine atom, NaCl is produced. It can be shown as follow:

That is oxidation-reduction takes place simultaneously.

This occurs because for oxidation to take place the electrons lost by the material that is oxidized must be accepted by atoms or ions of another material.

Oxidation refers to losing of electrons whereas decrease refers to the gaining of electrons. The reactions in which oxidation and reduction take place concurrently are referred to redox reaction. For e.g., CuO + H2 → Cu + H2O

Here copper oxide is reduced and thus acts as an oxidizing agent. H2 is oxidized and acts as a reducing agent. Also, for the reduce to happen the electrons gained by the material that is being reduced must be transferred from the atoms of ions of another material.

What is redox reaction?

What is oxidation number?