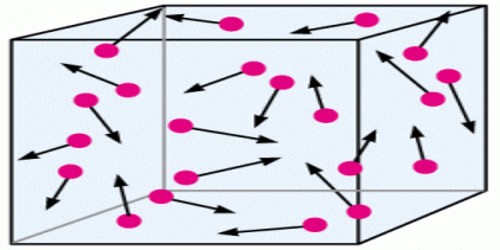 All gases more or less follow Boyle’s law, Charles’s law and Law of pressure. So it is considered that all gases have a common structure. The kinetic theory of gases is the study of the microscopic behavior of molecules and the interactions which lead to macroscopic relationships like the ideal gas law. All gases i.e., all matters are composed of innumerable tiny molecules. These molecules are in random motion. As temperature increases their kinetic energy also increases. Molecules of a solid stay very close to one another and their cohesive force is more. For this reason, a solid has a fixed shape and volume. Cohesive force between molecules of a liquid is comparatively less. As a result, it has no fixed shape, but has volume. Between molecules of a gas there is virtually no cohesive force, hence molecules can move freely. So, gas molecules do not have any shape and volume.

Devy, Joule, Ramford and other scientists have proved by performing different experiments that heat is a form of energy and due to the motion of particles of matter heat is produced. So it is seen that heat is the special character of motion. So, heat is produced due to the motion of gas molecules. It is the kinetic theory of gases. From the kinetic theory of gases relation between nature of motion of gases and the generated heat is known. 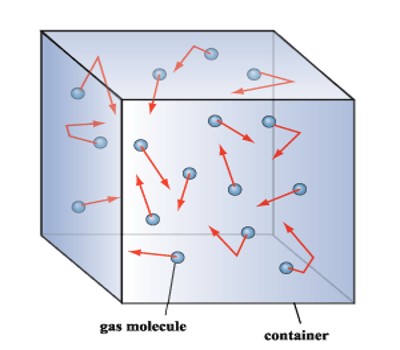 Based on the kinetic theory, pressure on the container walls can be quantitatively attributed to random collisions of molecules the average energy of which depends upon the gas temperature.

Regnault’s Method in Density of Gases

Frequency of Collisions of Gas Molecules