Home Physics Length Contraction according to the Theory of Relativity 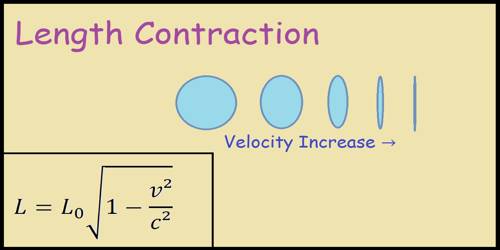 Length Contraction according to the Theory of Relativity

The length of a moving object becomes less than that of the stationary state. This phenomenon is called length contraction.

Determination of Length contraction: We know, the distance between the two ends of an object is its length. Let us consider two frames of reference. One is S and the other one is Sˊ [Fig]. Here the frame S is stationary. Let us represent it by ‘st’ and the frame Sˊ is moving which is represented by m. Let us consider the rod AB at rest.

According to the Lorentz’s inverse transform,

Subtracting equation (2) from equation (1) we get,

From equation (3) it is proved that. L0 > L. i. e., the length of a rod measured in moving condition will be less than the length measured at rest. This phenomenon is called the Lorentz Fitzerald contraction.

Excess Pressure inside a Soap Bubble