You are here: Home Literature Short Story of Robert Bruce

Robert Bruce was a famous king. Enemies invaded his kingdom. The king fought bravely but lost the battle. He had to flee from his kingdom to save his life. He took shelter in a remote cave. The king was always in a gloomy state for his unhappy condition. Once he was lying in the cave. Then he saw a spider trying hard to reach the ceiling of the cave. The spider failed again and again to succeed. But it did not give up hope. Bruce saw the spider climbing the ceiling after some unsuccessful attempts. This dauntless spider inspired Bruce to shake off the darkness of despair. He gathered an army of strong men and attacked his enemies The enemies were defeated and Bruce regained his kingdom. He was one of the most famous kings of Scotland. Robert the Bruce was the King of Scotland from 1306, until his death in 1329. He is known as “Hero of the Scottish War of Independence”. He was born in a noble Scottish family. Through his father, he was abstractedly related to the Scottish royal family. His mother had Gaelic antecedents.

In 1292, John Balliol was elected by the Scottish auditors to be the King of Scotland. However, there was argument amongst the Scottish Lords, and Edward I, the King of England, was asked to give a ruling. Edward, I gradually more condensed the power of John Balliol, making Scotland a vassal of England. Because John Balliol was Robert the Bruce’s enemy to the throne, in 1296, Robert the Bruce and his father signed a promise of loyalty to Edward I at Berwick Upon Tweed.

Returning to Scotland, Robert waged a highly successful revolutionary war against the English. At the Battle of Bannockburn in June 1314, he conquered a much better English army under Edward II, confirming the re-establishment of a sovereign Scottish kingdom. Two years later, his brother Edward Bruce was inaugurated as high king of Ireland but was killed in battle in 1318. 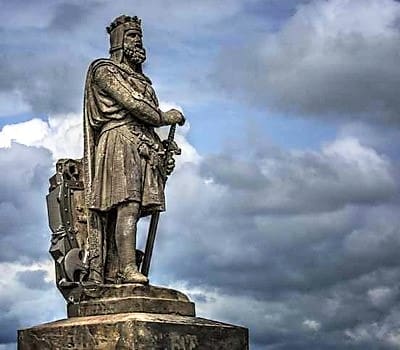 Returning to Scotland the following year, Robert the Bruce began a highly successful guerrilla war against the English. This culminated in the Battle of Bannockburn in June 1314, where Robert the Bruce defeated Edward II’s forces. This led to the re-establishment of an autonomous Scottish kingdom. 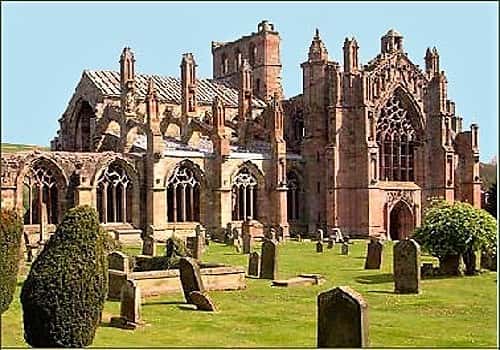 Fig: Melrose Abbey, burial place of the Heart of Robert the Bruce

Robert died on 7 June 1329, at the Manor of Cardross, near Dumbarton. He requested his heart to be taken to the Holy lands, to make up for his sins of not going on a Crusade and the murder of Comyn in a church. It was returned to Scotland and buried in Melrose Abbey.

His successor was his elder and only surviving son, David II.