‘Bagda’ prawn culture has been practiced by the method of blockade. During the full moon or on the night of new moon the water of high tide along with Bagda prawn fries was allowed to enter into the blockade. But due to entry of other unwanted species of prawn and other predatory fishes, the production was less. So at present by establishing modem farms ‘Bagda prawn culture is being done. Through this method, in the coastal regions, farms are made within blockade. Though Bagda prawns originally come from the sea, they go to the shallow waters for reproduction. 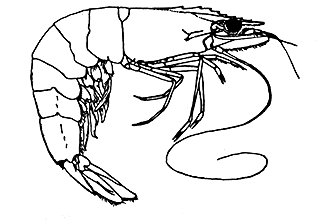 During ‘this time the expected species are collected and allowed to enter into the blockade through sluice gates. Due to this method, as the carnivorous fishes cannot enter, production is high. In these farms, additional food is to be supplied. Before releasing the fries in these farms they are kept in the Hapas for 2-5 days to be acclimatized to live in confined waters. Due to this practice the possibility of mortality because of the change of environment becomes less.

Among the coastal areas of Bangladesh in Khulna, estuary region of the Sundarbans, Cox’s bazar, Maheskhali, Chokoria, Bagerhat, Chittagong etc. the culture of Bagda prawn is practiced in large scale.

Culture of Carps in an Ideal Pond

Method of Culture of Fresh Water Prawn or Galda Prawn