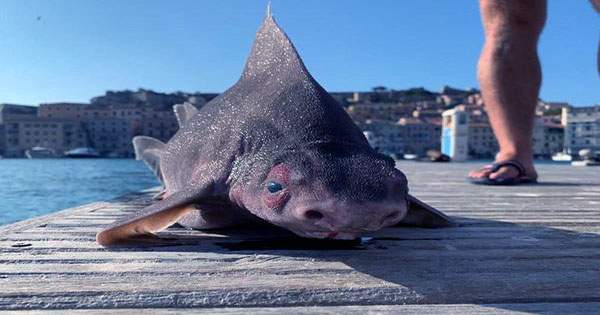 Once again, biologists have been shocked by the Cambrian Era, when animal life erupted into astounding diversity 541-485 million years ago. Titanokorys Gaines is the most recent find, a species that is famous today for its shape but was once notable for its immense size in comparison to the little animals of its day.

Titanokorys was discovered in the Burgess Shale, a location in the Canadian Rockies that provided us with the first precise look at the amazing range of forms that appeared roughly 508 million years ago. Many of these were so bizarre that they were given names based on acid trips, and the majority of them were never seen again.

Despite their richness, the majority of the organisms encased in the Burgess Shale were hardly bigger than a credit card. Titanokorys, on the other hand, was half a meter (20 inches) long; according to a Royal Society Open Science study.

Dr. Jean-Bernard Caron of the Royal Ontario Museum remarked in a statement, “The sheer size of this species is truly mind-boggling; this is one of the largest animals from the Cambrian period ever recovered.”

Titanokorys has been known to a segment of the general public for two years, with its discovery included in the CBC series First Animals, despite the fact that it has only recently been formally described.

Titanokorys was a radio don’t, a group of early arthropods that included Anomalocaris, the most notable member. The radiodonts are distinguished by their multifaceted eyes, cone-shaped mouths loaded with toothed plates, and terrifying claws that appear to emerge from the head to capture prey. Flaps propelled them through the Cambrian waters. Radiodonts were first discovered in the Burgess Shale, but they have now been discovered in other locations of similar age, indicating that they are Cambrian successes.

“Titanokorys belongs to the hurdiids, a subgroup of radiodonts with an extraordinarily long head covered by a three-part carapace that took on a variety of configurations. “These animals are basically little more than swimming heads because their heads are so long in relation to their bodies,” said co-author and University of Toronto student Joe Moysiuk.

It’s unclear what the carapace was for, let alone why they occurred in such a wide variety of shapes among radio don’t species. Titanokorys’ broad flattened carapace, which lies halfway between long and short-carapaced species, is thought to be indicative of a species that lived near to the seafloor, according to the authors.

“These mysterious creatures had a significant impact on Cambrian seafloor ecosystems. Their front limbs resembled numerous piled rakes, and they would have been extremely efficient in bringing anything caught in their tiny spines to the mouth. “The massive dorsal carapace could have served as a plough,” Caron speculated.

Large predators can only exist in limited numbers in ecosystems. Although 12 (mainly fragmentary) Titanokorys specimens have been discovered, the smaller radio doesn’t Cambroraster falcatus, which lived in comparable areas and may have competed with Titanokorys for prey, was significantly more common.

In Seconds Synthetic Biology Circuits can react on Protein-protein Interactions