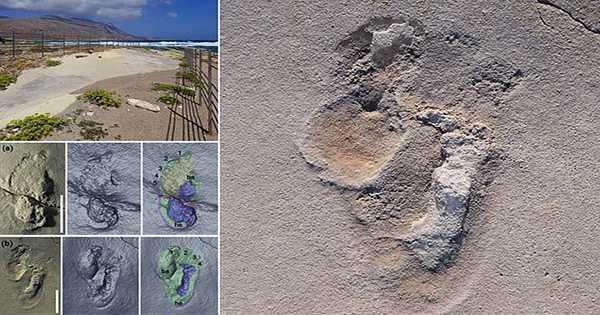 Researchers claim that footprints found on a beach in Crete are genuine, originating from members of the extended human family. Furthermore, they are significantly older than originally thought, making them the earliest direct evidence of bipedalism in our ancestors, far outdoing their African counterparts. Footprints discovered near Trachilos, Crete, in 2017 alleged to be proof of 5.7 million-year-old human ancestors walking upright. This came as a shock, as it suggested that one of the most pivotal stages in human evolution might have occurred outside of Africa.

People questioned if the dating was correct, or if knuckle walkers like modern gorillas, based on the notion that exceptional claims demand extraordinary proof, may have created the impressions. The second issue is refuted by a report published in Scientific Reports, which acknowledges the initial dating but only because the prints were made even earlier than previously assumed.

The research estimates the footprints are in sediments put down 6.05 million years ago based on the magnetic polarity of the stratum in which the prints were discovered and the species abundance of adjacent marine creatures. The cloth would have been soft enough to hold imprints so vividly only when it was new. The authors conclude that there is a slight chance that the prints are older than this figure, but nearly none that they are younger. Dr. Uwe Kirscher of the University of Tübingen claimed in a statement that the traces are nearly 2.5 million years older than those attributed to Australopithecus afarensis (Lucy) from Laetoli in Tanzania.

This does not necessarily imply that hominins in Europe walked upright before their African counterparts. Orrorin tugenesis was a species that lived in Kenya around the same time. Although no footprints or foot bones have been discovered, the morphology of Orrorin femurs suggests they walked upright. Because the Sahara was temporarily expanding at the period, there was likely no interaction between Europe and most of Africa, so upright walking may have evolved separately in both areas rather than one seeding the other.

Nonetheless, if Kirscher and co-authors are correct, the findings suggest that we need to broaden our search for the origins of human bipedality. It also reveals something about how our ancestors achieved upright status. Professor per Ahlberg of Uppsala University says, “The oldest human foot utilized for upright walking was a ball, with a powerful parallel big toe and increasingly shorter side toes.” All of these characteristics are thought to be unique to hominins.

Reaching Crete now would necessitate technology far beyond that of early hominins, but a landbridge connected the island to the European mainland six million years ago. Professor Madelaine Böhme of Tübingen, one of the authors, previously unearthed 7.2 million-year-old bones near Athens that were designated Graecopithecus Freyberg, a new species. Even earlier, G. Freyberg reveals the presence of probable hominins in the area. The authors point to evidence against the older African ape/hominin Sahelanthropus tchadensis being bipedal, which would make the Cretan footprints the oldest strong evidence of bipedalism in our probable ancestors.