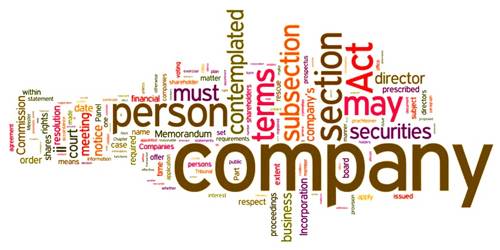 The term Promoter is not defined in the Act. A promoter is a word which is used to describe the persons who initially plan the formation of a company and bring it into existence. Promoters are the people, who, for themselves or on behalf of others, organize a corporation.

The term ‘promoter’ is a term of business and not of law. It has not been defined anywhere in the Act, but a number of judicial decisions have attempted to explain it.

Palmer – “A person, who originates a scheme for the formation of the company, has the Memo and the Articles prepared, executed and registered and finds the first directors, settles the terms of the preliminary contracts and prospectus (if any) and makes arrangements for advertising and circulating the prospectus and placing the capital is a Promoter.”

“A person who has as done these things but has done a substantial part of them so that he may be regarded as having an effective hand in the formation or floatation of the company is also a promoter.” –Sengupta.

Bowen L.J., in Whaley Bridge Printing Co. v. Green, stated that the term promoter is not a term of law, but of business “usefully summing tip in a single word, a number of business Operations familiar to the commercial world by which a company is generally brought into existence.

Importance of Insurance for Socioeconomic Development