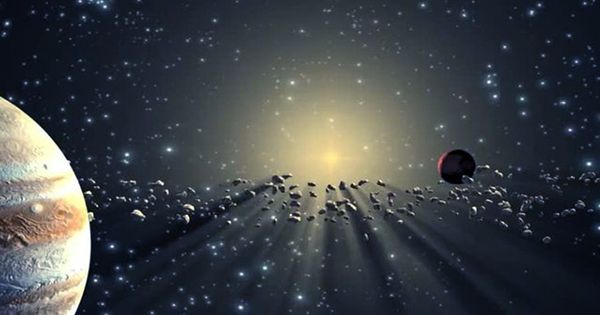 The solar system can be described as quite tidy. Close to the sun, you have four rocky planets. Away from the sun you have four gas giants. The top theory of this distinct formation points to Jupiter – scientists think it was formed first and created a separation. A new theory has now proposed something very different. As science has reported, an international team of researchers has suggested that elements of the inner solar system were first attached to the planet. As these pieces grew due to radioactive decay, they became hot, molten mini-worlds. Heat is responsible for them losing most of their volatile material, including water, which was then pushed into the outer solar system.

There, the giant planets begin to grow larger and wetter. These four planets, their lunar system and other bodies in the outer solar system are rich in water. This scenario was created using computer simulations and is based on the analysis of meteorites in the inner and outer solar system as well as observations of planets orbiting other stars.

Lead author Dr Tim Lichtenberg from the University of Oxford said in a statement, “The time lag between the different formations of these oceanic populations meant that their internal thermal engines differed considerably from their radioactive decay. The planets in the inner solar system became very hot; the inner magma developed oceans, rapidly formed iron cores and reduced their initial volatile material, resulting in the formation of dry planetary compositions. In comparison, the outer solar system’s planetary phases were formed later and therefore experienced significantly lower internal temperatures and therefore limit the basic structure of iron, and are volatile-free.” “Initially formed and dry inner solar system and later formed and wet outer solar system were set in two very different evolutionary paths at the very beginning of their history. This has opened up new avenues for understanding the origins of the Earth’s primitive atmosphere and the origins of the solar system in the context of extrinsic censuses across galaxies. “

In view, the stars in the inner solar system were formed about 500,000 years before the stars in the outer solar system. This gap allows the decay of elements such as aluminum-26. In the inner solar system, this erosion occurred inside the plastic, heating them up. Most of this material is gone as soon as the gas giant planets begin to form. The formation of stars in the new, cooler outer sky was influenced by the motion of the snow-line, an area where the water surrounding them turned into ice crystals. At first, it was very close to the sun because the sun was much fainter, but as soon as our star started to get brighter, it went out. Ice crystals are the main reason for the formation of plastics so the snowline takes time to create the conditions for this two-step process.