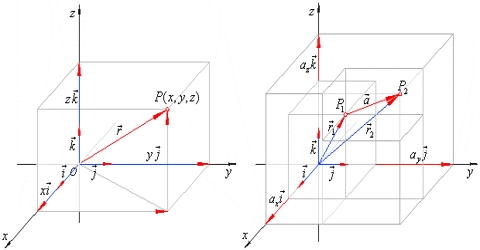 While expressing a vector quantity with its components we will consider resolution only in three-dimensional rectangular coordinates.

In three dimensional coordinate system, a position vector can be expressed in the following way. 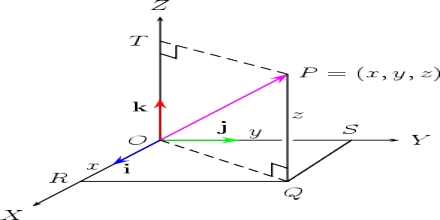 Proof: Let OX, OY and OZ be three lines perpendicular to one another and corresponds to X, Y and Z axes respectively [Figure].

Let a position vector ř be represented by line OP, in this axes-system, both in magnitude and direction.

Let consider that the co-ordinate of P is (x, y, z) and î, ĵ and ƙ are the unit vectors along the axes X, Y and Z respectively. Here PR is drawn normal to plane XY and RQ is normal to OX [Figure].

Here, x, y and z are the components of vector ř along X, Y and Z axis respectively.

From figure we get,