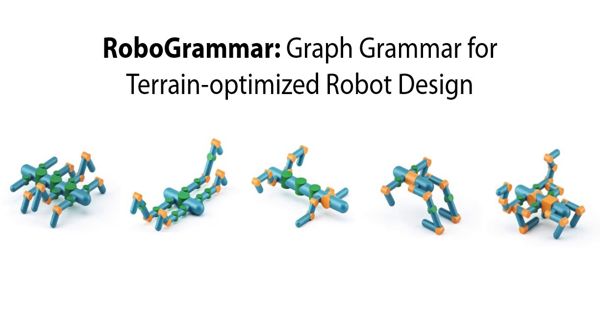 RoboGrammar is a modern technology that automates and optimizes the construction of robots. The new method of MIT researchers optimizes the shape of robots for different types of terrain. The device creates robots inspired by arthropods to cross a number of terrains. It may give rise to more innovative robot types with improved functionality.

Researchers of the Massachusetts Institute of Technology (MIT) have developed a framework that stimulates and optimizes robot architecture and control programs. Based on inputs of the available components and the expected landscape, RoboGrammar identifies the problem, designs possible solutions, and selects the best ones, using graph grammar to design all permutations.

RoboGrammar avoids jumbled structures yielded from arbitrary connections between parts by following rules on a component arrangement, or graph grammar, inspired by arthropods.

Choosing the correct shape would be crucial to the robot’s ability to navigate a specific landscape. And it’s difficult to build and evaluate some sort of potential. But now the MIT-developed framework makes it possible to model and decide which concept works best. You start by asking the machine, called RoboGrammar, which robot parts lie around your shop-wheels, joints, etc. You’ll even tell him what landscape the robot requires to traverse. And RoboGrammar does the rest of it, creating an integrated configuration and control software for your robot.

The advance may have pumped a shot of computer-aided imagination into the area. “Robot design is still a very manual process,” says Allan Zhao, the paper’s leading author and Ph.D. student at the MIT Computer Science and Artificial Intelligence Laboratory (CSAIL). He explains RoboGrammar as “a way to come up with new, more inventive robot designs that could potentially be more effective.”

Zhao is the lead author of the paper, which he will present at this month’s SIGGRAPH Asia conference. Co-authors include Ph.D. student Jie Xu, postdoc Mina Konakovi?-Lukovi?, postdoc Josephine Hughes, Ph.D. student Andrew Spielberg, and professors Daniela Rus and Wojciech Matusik, all of MIT.

Robots are designed for an almost infinite range of roles, but “they all tend to be very similar in their overall shape and design,” says Zhao. For example, “when you think of building a robot that needs to cross various terrains, you immediately jump to a quadruped,” he says, referring to a four-legged animal like a dog. “We were wondering if that’s really the optimal design.”

Zhao’s team hypothesized that more creative nature could boost functionality. So they designed a computer model for the task-a system that was not unduly inspired by the previous convention. And though inventiveness was the target, Zhao had to lay down some ground rules. The world of conceivable robotic types is “primarily composed of nonsensical designs,” Zhao writes in the article. “If you can just connect the parts in arbitrary ways, you end up with a jumble,” he says. To stop this, his team created a “graph grammar”-a collection of restrictions on the organization of robot components.

Zhao claims that the principles of his graph grammar were influenced not by other robots but by animals—arthropods in particular. Insects, crabs, and lobsters are included in these invertebrates. As a group, arthropods are an evolutionary success story, accounting for more than 80% of recognized animal species. “They’re characterized by having a central body with a variable number of segments. Some segments may have legs attached,” says Zhao. “And we noticed that that’s enough to describe not only arthropods but more familiar forms as well,” like the quadrupeds.

A phalanx of robots

Using Zhao’s graph grammatical, RoboGrammar works in three sequential steps: identifying the problem, designing potential robotic solutions, then choosing the optimal ones. Issue definition is primarily the responsibility of the human consumer, who inputs a range of accessible robotic components, such as engines, legs, and connecting pieces. “That’s key to making sure the final robots can actually be built in the real world,” says Zhao. The consumer also determines the variety of terrain to be crossed, which can require variations of elements such as stairs, flat areas, or slippery surfaces.

With these inputs, RoboGrammar then uses the graph grammar rules to design hundreds of thousands of potential robot structures. Some of them look vaguely like a racecar. Others look like a spider or a push-up guy. “It was pretty inspiring for us to see the variety of designs,” says Zhao. “It clearly demonstrates the expressiveness of the grammar,” he said. “Yet while the grammar can turn out to be abundance, the compositions are not necessarily of the highest nature.

Choosing the right robot design involves monitoring the motions of each robot and determining its work. “Up until now, these robots are just structures,” says Zhao. The controller is a series of commands that bring these systems to life, controlling the sequence of motions of the different engines of the robot. The team created a controller for each robot with an algorithm called Model Predictive Control, which gives priority to rapid forward movement.

“The shape and the controller of the robot are deeply intertwined,” says Zhao, “which is why we have to optimize a controller for every given robot individually.” Once each simulated robot is free to move about, the researchers seek high-performing robots with a “graph heuristic search.” This neural network algorithm iteratively samples and evaluates sets of robots, and it learns which designs tend to work better for a given task. “The heuristic function improves over time,” says Zhao, “and the search converges to the optimal robot.”

This all happens before the human designer ever picks up a screw.

Zhao wants the device to be a spark for human imagination. He describes RoboGrammar as a “tool for robot designers to expand the space of robot structures they draw upon.” To show its feasibility, his team plans to build and test some of RoboGrammar’s best robots in the real world. Zhao continues that the device could be modified to achieve robotic targets outside the landscape. And he says that RoboGrammar could help populate virtual worlds. “Let’s say in a video game you wanted to generate lots of kinds of robots, without an artist having to create each one,” says Zhao. “RoboGrammar would work for that almost immediately.”

Rick Perry in charge of US nuclear arsenal, just Fell for Instagram hoax