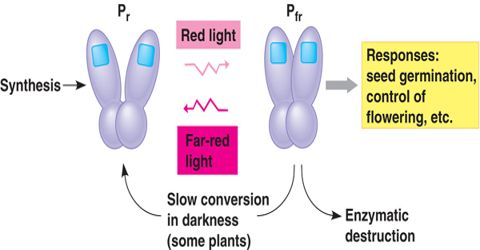 Role of phytochrome pigments in flowering

Phytochrome pigments: Phytochrome is a kind of pigment. This pigment can ‘possibly’ be extracted from different plants.

Phytochrome is a kind of protein based on Phytochrore prosthetic group. Phytochrome pigments absorb red and far-red light but it absorbs a minute amount of blue light. It occurs in two different forms one is phytochrome P660, which absorbs 660mμ light. Either of these two forms can be converted to the other. 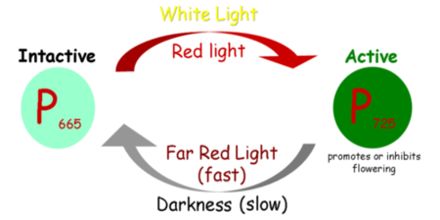 Scientists opine that phytochrome regulates the flowering of plants. There are three types of phytochrome reactions which organize plant growth and maturity. The “very low fluence responses” need very tiny light, about one second of sunlight; the “low fluence responses” require an middle amount of light, about one sound of sunlight; and the “high irradiance responses” require prolonged irradiation, many minutes to many hours of sunlight. Borthwick and Hendrick’s two scientists make an experiment with Soyabean, a short day plant. They gave red light during the darkness and found that the plant did not initiate flowering. But the plant flowered when they gave far red light. This experiment gave an opposite result when it was applied for a long day plant.

What is Floral Diagram?