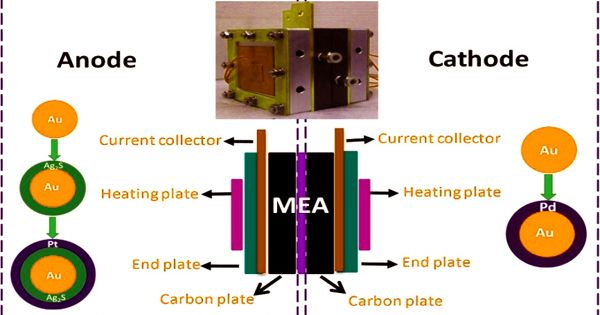 Methanol oxidation based fuel cells has immense potential in the engine and technical industries. Methanol fuel can be combined with water in varying amounts in SI engines. In order to improve their energy efficiency, scientists consider using electrodes made of thin palladium-based metallic glass films. Methanol fuel is likely to accumulate water when exposed to the environment for a significant amount of time, such as during transport or storage. A group of researchers from the Far Eastern Federal University (FEFU), Austria, Turkey, Switzerland, and the United Kingdom has produced new metallic glass for this purpose. The findings have been published in the Nanoscale journal.

Thin palladium-based metallic glass films with gold and silicone additives (Pd79Au9Si12) are prospective materials for the manufacture of energy-generating catalysts for direct methanol fuel cells. In the future, they could replace less effective and more costly platinum-based parts.

A group of researchers from Far Eastern Federal University (FEFU), Austria, Turkey, Switzerland, and the UK has developed a new metallic glass for this application. The results were reported in the Nanoscale journal.

Metal-free catalysts are not vulnerable to gas poisoning in methanol fuel cells and also show resistance to crossover methanol. Methanol fuel cells may be used in vehicles and other special devices which must automatically produce force and thus require a special energy supply system. In addition, such fuel cells could be used in telecommunications, data centers, and residential markets.

“The possible use of metallic glass as a material for this type of electrode was previously defined in scientific literature, but earlier papers concentrated on macroscopic materials. We were able to prove that nano-sized thin films of metallic glass deposited on widely used silicone substrates could effectively oxidize methanol. Also after several working cycles, the films remain stable. Our findings considerably extend the reach of the quest for new materials for the energy field,” said Yurii Ivanov, co-author of the work and lecturer at the Department of Computer Systems at the FEFU School of Natural Sciences.

The new palladium-based metallic glass is the best methanol oxidation material in fuel elements to date and surpasses all current technologies and industrial solutions. According to the contrast with the most common materials as an electrode for methanol oxidation, the new solution has one of the best efficiency values and the highest tolerance to carbon monoxide poisoning, which typically induces electrode degradation.

In order to begin the realistic implementation of the latest development, the electrodes need to be scaled up and calibrated to the individual fuel cells. The team plans to continue the quest for the right metallic glass composition in order to improve the reliability and efficiency of fuel cells based on methanol oxidation. Actually, the efficiency factor for such cells ranges from 40% to 60% (while that of a gasoline engine is only 20-30 percent).

FEFU is involved in the development of novel materials with special properties and characteristics to participate in next-generation electronics, renewable energy, building, and other sectors. Earlier, a team of scientists from FEFU, MISiS, and MSU, along with their foreign colleagues, had discovered a way to saturate thin layers of metallic glass with hydrogen at room temperature, thereby taking another step towards solving one of the biggest hydrogen energy problems. As a result, researchers greatly extend the spectrum of cost-effective, energy-efficient, and highly active materials and methods for this field of the energy sector.