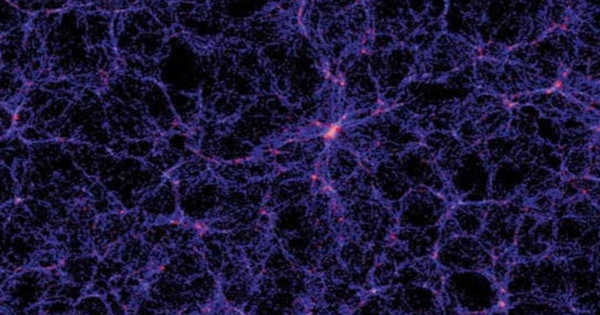 Spectroscopic methods provide unrivaled precision in measuring energy differences. The energy differences of different gravitational states are measured in gravity resonance spectroscopy without using electromagnetic interaction. This gives a very clean and background-free look at gravitation and topics related to the central problem of dark energy and dark matter at short distances. We examine the effect of additional dark energy scalar symmetron fields, a leading candidate for a screened dark energy field, and place limits in a large volume of parameter space in this article.

Dark Energy is widely thought to be the driving force behind the universe’s accelerating expansion, and several theories have been proposed to explain its enigmatic nature. These theories, however, predict that its influence on quantum scales must be vanishingly small, and experiments to date have not been precise enough to either confirm or disprove them.

A team led by Hartmut Abele at TU Wien in Austria demonstrated a robust experimental technique for studying one such theory using ultra-cold neutrons in new research published in EPJ ST. Their approach, dubbed ‘Gravity Resonance Spectroscopy’ (GRS), could bring researchers one step closer to unraveling one of cosmology’s greatest mysteries.

Previously, a phenomenon is known as ‘scalar symmetron fields’ was proposed as a possible candidate for Dark Energy. If these fields exist, they will be far weaker than gravity, which is currently the weakest fundamental force known to physics. Researchers could prove the existence of gravitational fields experimentally by looking for extremely subtle anomalies in the behaviors of quantum particles trapped in gravitational fields.

Within a gravitational field, ultra-cold neutrons can take on a variety of discrete quantum states that vary with the strength of the field. The finely tuned mechanical oscillations of a near-perfect mirror cause these neutrons to transition to higher-energy quantum states via GRS. Any deviations from the expected values for the energy differences between these states could then be attributed to Dark Energy.

While astronomers searched for dark matter gravitational signatures, particle physicists were hard at work. The SM’s supersymmetric extension predicts new massive particles, the lightest of which is expected to account for nearly all of the dark matter in the Universe.

Abele’s team designed and demonstrated a GRS experiment called qBOUNCE in their study, which was based on a technique called Ramsey spectroscopy. This entailed causing neutrons in an ultra-cold beam to transition to higher-energy quantum states, then scattering away any unwanted states and collecting the remaining neutrons in a detector. The researchers were able to place far more stringent bounds on the parameters of scalar symmetron fields by taking precise measurements of the energy differences between specific states. Their method now paves the way for even more precise Dark Energy searches in future research.

Theoretical, observational, and experimental efforts to shed light on dark energy or modified gravity are still ongoing. This white paper proposes new methods for peering deeper than ever into this dark sector by directly probing it in the Solar System’s vicinity.