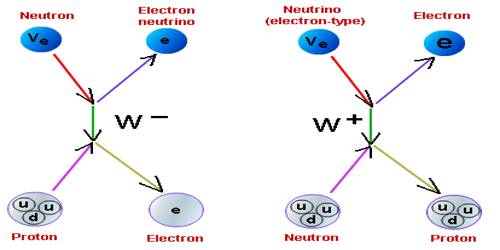 Weak Nuclear Force: In nature, there are some elements whose nucleus disintegrate spontaneously e.g., Uranium, Thorium etc. These nucleus are called radioactive nucleus. Three types of rays or particles are emitted from this radioactive nucleus. These are called α-particles, β-particles, and γ-rays. Weak nuclear force is responsible for the emission of β-particles and neutrino. Because of this weak nuclear force, much nuclear disintegration takes place.

When beta particles are emitted from the radioactive nucleus, then energy is also emitted along with it. But from the experimental result, it is observed that amount of energy emitted from the nucleus is more than the kinetic energy of beta particles. Naturally, questions arise in the mind of scientists that if β-particles carry a small fraction of energy, then where does rest of the energy go? In 1930, W. Pauli proposed that the rest of energy is carried by another type of particles which is emitted along

with β-particles. These particles are called neutrino. Emission of this β-particles and neutrino occur due to the fourth fundamental force which is called weak Nuclear force. This force is very weak compared to strong nuclear force or electromagnetic force Disintegration of many nuclei occurs because of this force and β-decay occurs from the nucleus. Scientists think that by the exchange of particles called bosons this force becomes effective.

What is Random Errors?