You are here: Home Biology What is Vascular Bundle? There are three types of the vascular bundle: 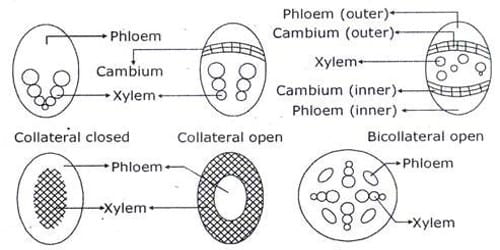 Collateral Bundle: A vascular bundle in which a strand of phloem is present peripheral to the strand of xylem on the same radius side by side is known as a collateral bundle. Two types:

Bicollateral Bundle: A vascular bundle with a phloem situated on the peripheral and inner side of xylem is known as bicollateral bundle. Ex. Cucurbita stem.

Concentric Bundle: The bundle in which one type of vascular tissue surrounds the other is known as a concentric bundle. Two types:

Radial Vascular Bundle: The primary xylem and primary phloem strands are separated from each other by nonvascular tissues and they are situated on alternate radii of an axis, is known as radial vascular bundle or radial bundle.