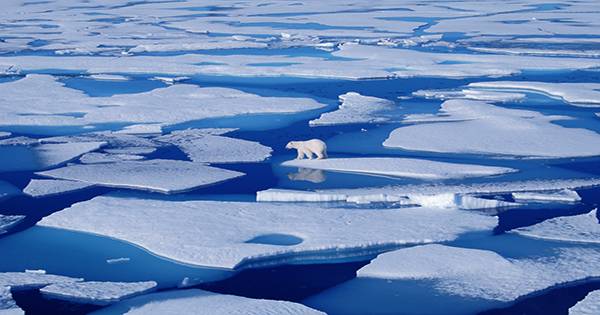 Global warming has increased the loss of ice sheets around the world and as a result, the reduction of ice has contributed to global warming in various ways, creating a cycle that does not promote good news for the earth. A new study from Nature Communications assesses how much ice loss contributes to rising temperatures.

The study estimates that if the Arctic Ocean were to completely lose its ice cover, it would add 0.2°C (0.36°F) to the average increase in global temperature. Centigrade 0.4°C (0.72°F) will increase. As we continue to struggle to keep the global average temperature rise below  2 °C (3.6 °F), the difference in ice loss is significant.

“If global ice masses shrink, the amount of sunlight that hit the Earth’s surface has changed again. The Arctic’s ice cover is depleting and more energy is being absorbed by ocean water,” said lead author Nico Wunderling. The Potsdam Institute for Research Studies said in a statement. “It’s referred to as the albedo opinion. It’s like wearing white or black in the summer.

Albedo responses contribute 55 percent to this potential increase. However, melting ice also changes the concentration of water vapor in the atmosphere. A more humid world is a world that keeps the heat better – that’s not what we want right now. It also changes the coverage of the clouds and raises the temperature again. Water vapor changes account for 30 percent of that 0.4°C (0.72°F), with the remaining 15 percent due to changes in cloud coverage.

“[E]very tenth of a degree of warming counts for our climate,” said Ricarda Winkelmann, who led the research group. “A preventing Earth system feedback loop, or vicious circles, is thus more urgent than ever.”

The team not only assumed how ice damage would affect temperature but other effects should also be considered. The Polar Regions have been able to trap greenhouse gases for millennia and these are slowly being released. Researchers at the International Siberian Shelf Study Expedition 2020 reported the first detection of methane from the continental opera of the Laptev Sea. The detection came from a depth of 300 meters (984 feet) off the east Siberian coast.

The group wrote on Facebook that they believe emissions are still small at the moment, but that this is a new and alarming alarm bell for the effects of the Arctic climate crisis. Polar Regions may feel distant but their protection has a global impact.