They consist of upright, slender axes bearing spirally arranged leaves. They are attached to the soil through multicellular and branched rhizoids. This stage bears the sex organs. Vegetative reproduction in mosses is by fragmentation and budding in the secondary protonema.

In sexual reproduction, the sex organs antheridia and archegonia are produced at the apex of the leafy shoots. After fertilization, the zygote develops into a sporophyte, consisting of a foot, seta and capsule. The sporophyte in mosses is more elaborate than that in liverworts. The capsule contains spores. Spores are formed after meiosis. The mosses have an elaborate mechanism of spore dispersal. Common examples of mosses are Funaria, Polyfrichum and Sphagnum (Figure). 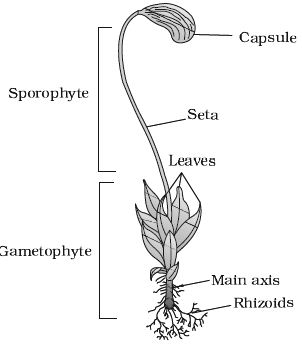 Discuss on Economic Importance of Saccharomyces

What do you mean by Double Fertilization?