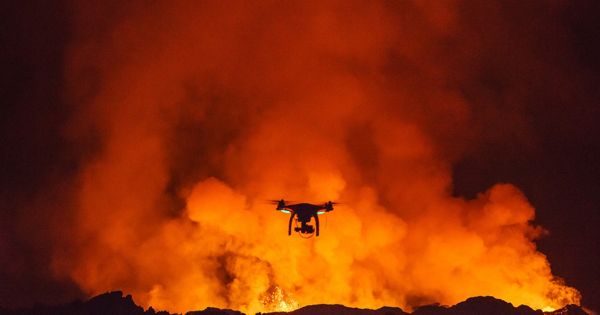 Researchers are developing novel 3D models with a volcanic resolution of a centimeter in Guatemala. According to the study, drones were used to view the lava dome, a viscous lava plug. Researchers have found that the lava dome exhibits motions on two distinct time scales: gradual development and development of the dome and sudden extrusion of the viscous lava.

Drone technology continues to develop, with drones equipped to be used in risky conditions, such as geological surveys on rugged terrain or around volcanoes. Thanks to the challenging accessibility and the high possibility of failure or eruption, the photography of active volcanoes have so far been a big obstacle in volcanology. Researchers around Edgar Zorn from the German Geosciences Research Center GFZ in Potsdam are now presenting the findings of a series of repeated survey flights with optical and thermal imaging cameras at the Santa Maria volcano in Guatemala. Drones were used to study the dome of the lava, a viscous plug of the lava.

The researchers were able to show that the lava dome shows movements on two different time scales: slow expansion and growth of the dome and fast extrusion of viscous lava. The study was published in the journal “Scientific Reports.”

Using a special computer algorithm, the researchers were able to construct full and accurate 3D models from the images. They obtained a 3D topography and a volcanic temperature model with a resolution of just a few centimeters. Drone flights greatly minimize the danger to volcanologists, as cameras may be flown straight to risky sites without the need for scientists to approach them themselves. Instead, the greatest challenge lies in the post-processing and calculation of the models.

“We have equipped a drone with different cameras,” says Edgar Zorn from GFZ, the first author of the study. “We then flew the drone over the crater at various intervals, measuring the movements of the lava flow and a lava dome using a specific type of stereo photography with a precision never seen before.” By comparing the drone results, we were able to calculate the volcano’s flow rate, movement patterns, and surface temperature. These parameters are critical for predicting the likelihood of explosive volcanoes. Researchers have also been able to extract the lava flow properties from these results.

“We have shown that the use of drones can help to completely re-measure even the most dangerous and active volcanoes on Earth from a safe distance,” continues Edgar Zorn. “A regular and systematic survey of dangerous volcanoes with drones seems to be almost within one’s grasp,” says Thomas Walter, a volcanologist at GFZ, who was also interested in the research.

The two drone cameras used on the Caliente volcanic cone of the Santa Maria volcano were able to capture high-resolution images on one side and thermal photos on the other. Using a special computer algorithm, the researchers have been able to construct complete and accurate 3D models from these images. They obtained a 3D topography and a volcanic temperature model with a resolution of just a few centimeters.

Drone flights greatly minimize the danger to volcanologists, as cameras may be flown straight to risky sites without the need for scientists to approach them themselves. Instead, the biggest difficulty lies in the post-processing and estimation of the templates.

“The 3D models of the various flights must be positioned exactly so that they can be compared. This requires painstaking detail work, but the effort is worth it because even minimal movements become immediately visible,” says Edgar Zorn. “In the study, we presented some new possibilities for the representation and measurement of certain ground movements, which could be very useful in future projects.”

Based on the success of the report, it is hoped that frequent and systematic surveys of hazardous drone volcanoes would be part of regular exploratory activities.

Man Resurrects Childhood Imaginary Friend Using AI. Then It Tried To Murder Him