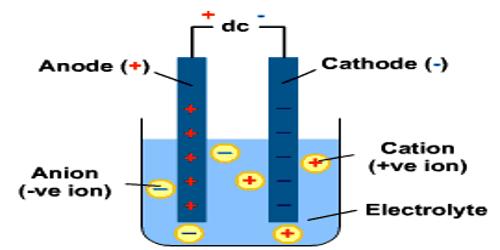 Early in the investigation of the effect of passing current through solutions, it was discovered that decomposition of the solute took place. As soon as the current stopped decomposition ceased, clearly indicating that the decomposition was in some way connected with the passage of the current. Also, the products appeared only at the poles where the electricity entered or left the solution.

Electrolysis is the process by which ionic substances are decomposed (broken down) into simpler substances when an electric current is passed through them. Electricity is the flow of electrons or ions.

M. Faraday (1832-33) studied the phenomena associated with electrolysis and introduced the nomenclature which is used to-day. 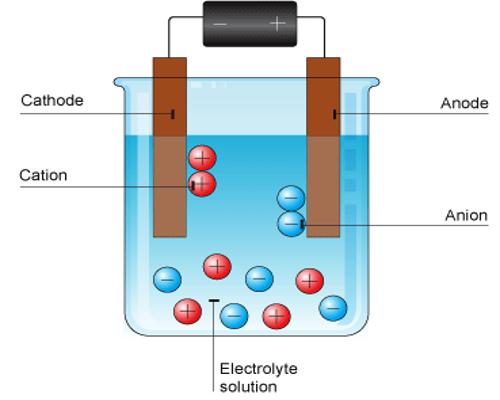 The pole, usually wires or plates, through which the electricity was supposed to enter the solution was termed cathode and the pole where it was supposed to leave the solution was called the anode; the former is the one attached to what is known by convention as the ‘positive pole’ of the battery and the latter is attached to the ‘negative pole’. The cathode and anode are termed the electrodes. Faraday assumed the flow of electricity through solutions to be associated with the movement of charged particles; these were called ions (Greek: wanderer). He however, did sot say anything about their origin. The particles carrying a positive charge and moving towards the cathode were referred to as cations and the ones carrying a negative charge and moving towards the anode were referred to as anions. On reaching the electrodes the charges on the ions were thought to be neutralized and the particles deposited in the form of atoms or molecules.