Home Chemistry The Buoyancy Method in Density of Gases 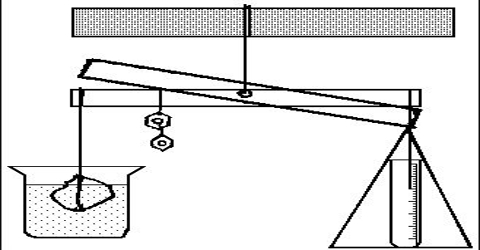 This is a very accurate method of determining gas density. A very small quantity of the gas is sufficient for measurement by this method. It uses a form of a micro-balance constructed entirely of good quartz. The apparatus is shown in Figure. 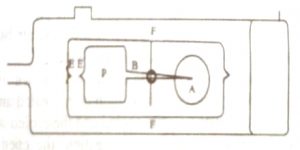 The buoyancy bulb, A, having a capacity of about 8 mL is evacuated and suspended from one end of the beam, B, the other end of the beam is fixed to the plate, P, whose area is equal to that of the bulb, A.

The beam is attached to a frame by means of quartz fibre, FF, around which it can swing. The whole is enclosed within a tube 2 to 3 cm wide and 8 to 10 cm long. Arrangements for keeping the tube at constant temperature are provided and the tube may be evacuated and filled with gas at any pressure.

The tube is first evacuated and a gas, whose density is accurately known, is slowly introduced; the buoyancy bulb, A, nuts until the pointers, EE, are on the same level. The pressure of the gas is noted. The Sic is evaluated again and the gas under investigation is slowly introduced until the pointers are again at the same level. The pressure is noted. If P1 and P2 are the pressures of the two gases when the pointers arc at the same level, the densities of the gases must be equal at these pressures. If ρ is the density of the reference gas at pressure P1, then P2 = ρRT/M2 from which the molecular mass M2 of the gas under investigation may be calculated.