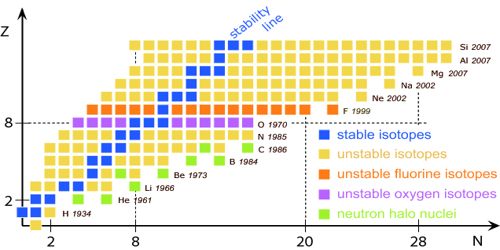 Stable and Unstable Nuclei: We know at the center of the atom there exists nucleus. A nucleus contains positively charged protons and inert neutrons. Lighter elements do not contain many protons. As a result, the repulsive force between the similar charges of protons is not much; hence protons do not come out of the nucleus. So without disintegrating the nucleus remains stable. These are called stable nuclei. Many nuclei in nature are very stable, most of the nuclei formed at the creation of the universe or after supernovae explosions many millions of years ago are still in existence now. In nature, bismuth is the stable nucleus that contains the highest number of protons. Its atomic number is 83 and the mass number is 209.

The elements which have an atomic number more than 83, their nucleus are not stable. Since the repulsive force between similar positive charges is extremely strong in these elements, charges come out of the nucleus. Consequently, the nucleus is disintegrated and is transformed into a different nut lens. These nuclei are called unstable nuclei. In unstable nuclei, the strong nuclear forces do not generate enough binding energy to hold the nucleus together permanently.