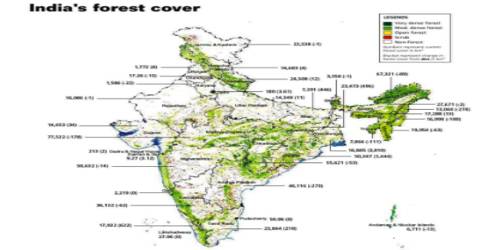 Both forest area and forest cover vary from state to state. Lakshadweep has zero percent forest area; Andaman and Nicobar Islands have 86.93 percent. Most of the states with less than 10 percent of the forest area lie in the north and northwestern part of the country. These are Rajasthan, Gujarat, Punjab, Haryana, and Delhi.

Most of the forests in Punjab and Haryana have been cleared for cultivation. States with 10-20 percent forest area are Tamil Nadu and West Bengal. In Peninsular India, excluding Tamil Nadu, Dadra and Nagar Haven and Goa, the area under forest cover is 20-30 percent. The northeastern states have more than 30 percent of the land under forest. Hilly topography and heavy rainfall are good for forest growth.

There is a lot of variation in actual forest cover, which ranges from 9.56 percent in Jammu and Kashmir to 84.01 percent in Andaman and Nicobar Islands. From the table showing the distribution of forests in India, it is clear that they are 15 states where the forest cover is more than one-third of the total area, which is the basic requirement for maintaining the ecological balance. On the basis of the percentage of the actual forest cover, the states have been grouped into four regions: