It takes place through the following steps:

Transfer of atmosheric nitrogen to soil

The nitric acid reacts with base of the salt to form soluble nitrate.

This is assimilated by plants to form proteins. This vegetable protein is consumed by herbivorous animals which in turn are the food of carnivorous animal and man. Nitrogen consumed by animals is restored to the soil in the form of urea in the excrete form ammonia in the soil.

Again, when animal and plant bodies undergo decay or animal excrete purify, most of the organic nitrogen in the protein is liberated as ammonia. This is oxidized in the soil by the combined action of nitrosifying and nitrofying bacteria into nitrate. Protein gives back nitrogen by the action of denitrifying bacteria present in the soil.

The nitrogen is shown in the following flow-sheet: 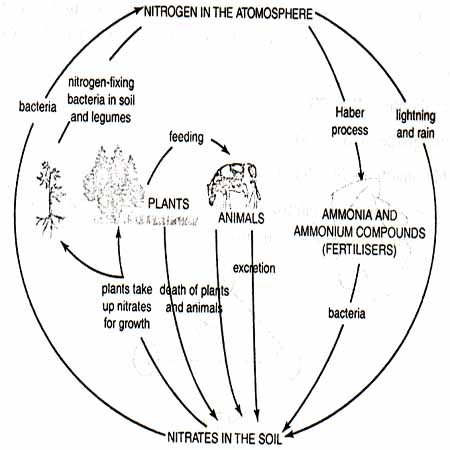 Nitrogen Cycle of the atmosphere