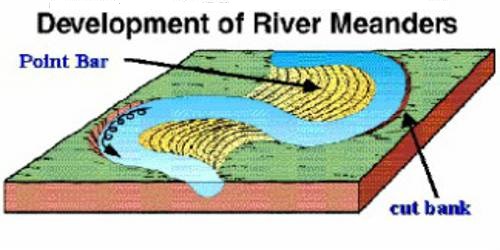 Point bars are also known as meander bars. They are found on the convex side of meanders of large rivers and are sediments deposited in a linear fashion by flowing waters along the bank. They are almost uniform in profile and in width and contain mixed sizes of sediments. Point bars are formed in meandering streams. When a river meanders the highest energy is near the outer edge of the oxbow shape or meander bend and is generally where erosion takes place (the cut bank). Stream energy on the opposite side (the point) is much lower and cannot carry as much sediment and becomes depositional. As the stream erodes the cut bank the point bar aggrades accordingly. 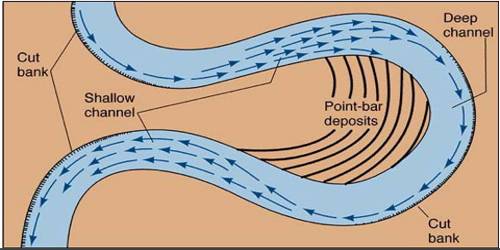 If there more than one ridge, narrow and elongated depressions am found in between the point bars. Rivers build a series of them depending upon the water flow and supply of sediment. As the rivers build the point bars on the convex side, the bank on the concave side will erode actively.