You are here: Home Biology Difference between Male and Female Roundworms

Roundworm is widespread throughout the world. They live as an endoparasite in the intestine of human and some other animal. Compared to other worms the roundworms are quite bigger in size, like an earthworm.

Difference between the male and female roundworms:

(1) The worm is small in size. Male Round Worm are thinner around. The male roundworm is smaller than the females and is usually 15-17 cm in length and 3 mm in diameter.

(3) Cloaca is present in the male roundworm. Its cloacal and genital apertures are not separate.

(5) Excretory materials and reproductive cells are discharged through the cloacal aperture of the male worm.

(6) The ejaculatory duct of the male repro­ductive system opens into the rectum to form cloaca, through which faeces and sperms are eliminated.

(7) Males have no or lace opening of reproductive opening on the posterior third of its body. There are spines like penial setae behind the cloacal aperture.

(9) The vulvar waist is absent in male roundworm. 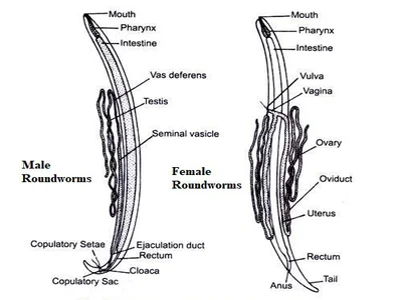 Female worm – These organs, are situated in the posterior half of the body of the worm. Eggs are produced at the posterior part of the ovary.

(1) Pernell worm is larger in size than the male worm. Females Round Worm are wider around. Female roundworms are larger than the males and are usually 20-25 cm in length and 5 mm in diameter.

(4) Females lack structures in pineal, spices or spine near its posterior opening.

(5) In the female worm, the excretory products are discharged through the cloacal aperture and the productive cells through the genital aperture.

(6) Females have a large reproductive opening on the posterior third of its body. (7) There are no penial setae in the female worm.

(9) The vulvar waist is present in the female roundworm.