You are here: Home Chemistry Uses of Sulphuric Acid

The uses for sulfuric acid are immeasurable, and it is usually found in manufactured chemicals ranging from composition to explosives. It is extensively used in the production of chemicals, e.g., in making hydrochloric acid, nitric acid, sulfate salts, artificial detergents, dyes and pigments, explosives, and drugs. It is used to make, accurately, hundreds of compounds needed by approximately every industry.

Sulphuric acid is called the king of chemicals. It is the most important industrial chemical. Some major uses of sulphuric acid are,

Sulfuric acid is the most frequently used chemical in the world and used in almost all industries like Fertilizers, Pharmaceuticals, Gasoline, Paper & Sugar bleaching, Steel manufacturing, Coloring agents, etc.

It is mostly used in making fertilizers. Sulfuric acid gives rise to phosphoric acid which produces phosphate fertilizers. Let’s see some of the other uses of sulfuric acid. 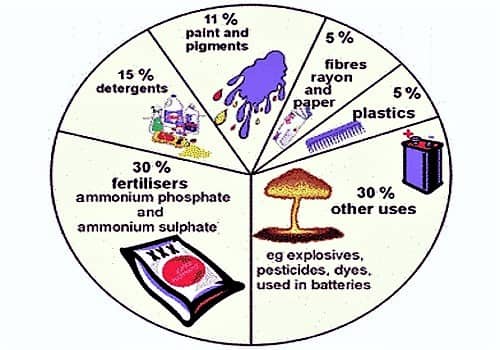 Sulfuric acid uses in the industry: It is used in different industries such as – wastewater processing, production of cleaning agents, processing of minerals, producing explosives, detergents and paper industry for the manufacture of aluminum sulfate. Amongst its many other uses is in the manufacture of hydrofluoric acid and phenol with propanone all of which are used in many industries. It is used in petroleum refining to wash impurities out of gasoline and other refinery products.

Sulfuric acid uses drugs: Used to damage the cancerous cell DNA by the manufacture of chemotherapy drugs. It is used in ointments to treat various skin infections. It is the basic ingredient of topical ointment named Debacterol in the treatment of canker sores. Sulphuric acid is used in the manufacturing process of such drugs.

Metal Processing: It is widely used in metal processing for example in the manufacture of copper and the manufacture of zinc and in cleaning the surface of steel sheet, known as ‘pickling’, prior to it being covered in a thin layer of tin, used to make cans for food.

Production of Fertilizers: When used in the production of fertilizers, the superphosphate of lime is mixed with ammonium sulfate. Hydrochloric acid, nitric acid, detergents, pigments, and sulfate salts are all made using sulfuric acid, and rayon and over-the-counter medications can also contain sulfuric acid.

Other applications are – it is used in the manufacture of batteries, detergents like trisodium phosphate, potato farming, printing ink, as a dehydrating agent, making paper, perfume, disinfectants, drugs, etc. Sulfuric acid is used in processing metals, e.g., in pickling (cleaning) iron and steel before plating them with tin or zinc.